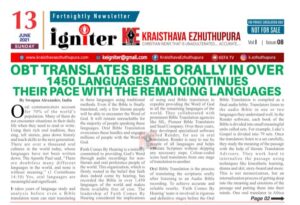 Oral communicators account for 70% of the world’s population. Many of them do not encounter situations in their daily life when they need to read or write. Using their rich oral tradition, they sing, tell stories, pass down history and teach skills to the next generation. There are over a thousand oral cultures in the world today, whose languages have not been written down. The Apostle Paul said, “There are doubtless many different languages in the world, and none is without meaning.” (1 Corinthians 14:10) Yes, oral languages are meaningful and significant.
It takes years of language study and analysis before even a Bible translation team can start translating in these languages using traditional methods. Even if the Bible is finally translated, only a few literate people will be able to encounter the Word of God. It will remain unreachable for the majority of people speaking these languages. Oral Bible Translation overcomes these hurdles and engages millions of people with the Word of God.

Faith Comes By Hearing is a ministry committed to providing God’s Word through audio recordings for non-literate and oral preference people of the world. This organization, which is firmly rooted in the belief that faith does indeed come by hearing, has recorded the Bible in over 1,450 languages of the world and makes them available free of cost. The leadership of Faith Comes By Hearing considered the implications of using oral Bible translation to expedite providing the Word of God to all the remaining languages of the world. They collaborated with prominent Bible Translation agencies like SIL, Pioneer Bible Translators and Seed Company. Over three years, they developed specialized software called Render, for use in oral translation. Render is easy to use by people of all languages and helps translate Scripture without skipping any necessary steps. Colour-coded icons lead translators from one stage of translation to another.

Oral Bible Translation is the process of translating the scriptures orally after listening to an Audio Bible recording. To achieve accurate and reliable results, ‘Faith Comes By Hearing’ team is involved in rigorous and definitive stages before the Oral Bible Translation is compiled as a final audio bible. Translators listen to the audio Bible in one or two languages they understand well. In the Render software, each book of the Bible is divided into small meaningful units called sets. For example, Luke’s Gospel is divided into 79 sets. Once the translators listen to a set carefully, they study the meaning of the passage with the help of literate Translation Advisors. They work hard to internalize the passage using techniques like kinesthetic learning, drama and skit, story-board and more. This is not memorization, but an internalization process of getting deep into the meaning and emotions of the passage and putting them into their minds. One oral translator in Africa says this about the process of internalization, “Now I am a walking Bible!”

After the team completes the initial translation, several people in the language community help and review it to determine if the meaning is clear and whether the language is natural and pleasing. Once their recommendations are included, the passage is translated into the source language (called back translation) and sent to a Bible Translation Consultant through Render. The consultant listens to the translation and the back translation, then communicates the required recommendations to the team. This process repeats until the consultant and the team are satisfied with the translation. As soon as the consultant approves a Scripture portion, it is made available to the language community through a variety of media. People listen to the Scripture through their mobile phones and social media.

Kraisthava Ezhuthupura Igniter team corresponded with Swapna Alexander from FCBH who said “God has allowed me to work with the Koch people of Bangladesh to translate the Word of God. In the past, many people tried to reach the Koch community with the Gospel, but they were not even interested in listening. Now they listen to orally translated Scripture with great interest and communicate eagerly with the translation team about the Gospel.
With a mission to unlock the mysteries of the holy scriptures to the 70 percent of the world population who live primarily in the oral culture, KE commends the relentless work done through the OBT project “I believe that one day when people from all nations, languages, and tribes praise God in heaven, there will be many Koch-speaking people there. Not only Koch but also people from all oral cultures from all over the world will sing praises to God,” added Swapna who serves as the Lead Bible Translation Consultant with Faith Comes By Hearing (FCBH)

Glowing while igniting, KE Igniter nominates the Editorial team for 2022- 2023

Verse by Verse Bible study on Gospel of John

Bangalore Center One PYPA has arranged a Special Meeting “SHACHAH”

VERSEVIEW INTEGRATES AI ENGINE WITHIN ITS APP TO TRANSLITERATE BIBLE LANGUAGES. A…

Article: LIVE WITH A PURPOSE TO PLEASE GOD! | Jacob…

ORAL BIBLE TRANSLATION A BOON TO OVER 900 UNREACHED PEOPLE…

Kids meet amidst the pandemic