The fate of the ones best depicted as the good soil in the parable of the sower, the ones with good hearts, may be long and drawn out. The hearts depicted by the wayside, the rocky soil, and the thorny ground all respond to the seed quickly. The Word to them is fulfilled easily. The ones with the thorns get to use the seed to fertilize the thorns. The ones who are ever so agile to see if what was preached can somehow be seen as a herald of an upswing in business, education, and other material swags. Jesus called it “the cares of life”. 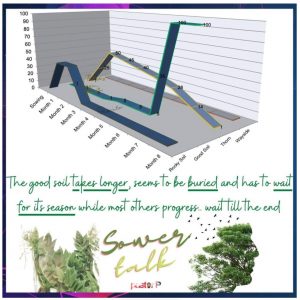 The stony ground gets to be all joyful and reflect on the Word. They profess, confess, and do much more; it seems they are the best of the bunch. They are nice people, but when faced with a challenge, and a miracle doesn’t happen instantly, or they don’t find the philosophical answer to a question about their faith, or when the Word’s stance seems offensive to someone, they have the ‘common sense’ to not die on that hill. They are smart people.The ones on the wayside at least allowed the seed to see the sun for a while before the birds made quick work of the Word.

The ones on the good soil are the silent ones. They don’t seem exuberant always. The seed gets “buried” in them. There may be a struggle as the seed dies. But it resurrects a new plant. Yet, while the stony ground already has a sapling, the good soil probably has an unseen, tiny radicle. While Joseph languished in prison, his brothers who sold him to that fate were increasing their flock. They sacrificed and worshipped and ate and drank. It seems Joseph alone had somehow missed his mark.

The thorns are thriving thanks to the nutrition the seeds provided, and the stony ground has the saplings growing and shining for God, and it doesn’t matter what season it is. The good ground wonders where it went wrong: Why do I have to wait for the Kairos¹ of God, why is my timeline dependent on a distant season of harvest? Does such a season even exist? Did I fail? Why do I struggle to grapple with God’s truth? I love the Word, but nothing seems to be sprouting, nothing seems to manifest. My life’s burdens are still the same, unlike that of any other person.

There will come a time: a day when Pharaoh promotes you to next-in-command, and ultimately God appoints you a Father to Pharaoh². A time when God raises up a harvest of a manifestation. The north and south will be commanded to give up and not hold back. You will see a hundredfold increase where you thought your ministry was buried. Your patience will see the harvest, but until then, apparent burial and crazy comparisons and no fruitfulness may all be facts. Wait for it. He knows what He is doing with your life. He paid for you in blood. His purposes will not fail.

Just keep walking with Him: the season comes when the harvest will not delay.

Article: WHAT DO YOU SEE? | Abel John

Article: God’s help is always there for those who trust in God | Jacob Varghese

Article: Bring Your Loaves, Not Your Miracles | Jacob…

Article: YOU ARE THE MAN! | Jacob Varghese