VERSEVIEW INTEGRATES AI ENGINE WITHIN ITS APP TO TRANSLITERATE BIBLE LANGUAGES. A BOON TO ALL CROSS-LANGUAGE BIBLE USERS 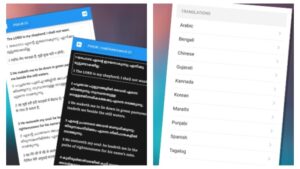 VerseView, the developer of VerseView Bible app, has stated therelease of version 8, that include an AI engine that can accurately covert Local languages into English transliteration on the fly. The first rollout will be focused on Indian languages, now limited to Malayalam.

This technology, in addition, has allowed downloadable Bible databases to be created, which can be used in conjunction with the existing Android, iOS and desktop applications from VerseView. This will greatly benefit Individuals who would love to study and participate in reading the Malayalam Bible but are more literate in the English language. This resource would help especially the younger Malayalee community who grew up in a country or city outside our homeland.

These AI technological advancements and Bible database additions will prove to be a blessing to all native Indian language speakers, allowing each to learn, read & share the Word in their native language. The usage of the word of God will have a greater impact on Churches alike, allowing the local community to add their language to their daily reading and services.

“VerseVIEW develops a collection of applications that brings the Bible and Song lyrics in various languages to your computer and your mobile devices. The purpose of VerseVIEW is to provide the Word of God and song lyrics in various languages through technology. All the VerseVIEW software applications are provided for free”. said Binu Ariyappallil Joseph, the Founder and Chief Software Architect of VerseView. “Our goal with this transliteration effort is to make an impact in the Malayalee Christian communities around the world where there is a desire to not only understand the Bible in our native language and use the feature to teach the Bible to our next generation, our children, using this tool”. He added

VerseVIEW was initially created as a simple tool to present Bible verses in English and Malayalam on the projector screen. Now, with what God has enabled the team, VerseVIEW has been developed into a powerful presentation tool with features to present on multiple screens and to add verses and lyrics to the lower thirds of live video streams. VerseVIEW PC version is now used by thousands of churches in India and around the world. The latest version will include features to include chord sheet for songs, transliteration of Malayalam songs and fully customizable themes for adding lower thirds to the live stream. Bible databases are provided for over 30 different languages and 1000s of song lyrics are available in many languages for presentation.

The software has also proved to be a blessing during the hard times of lockdown. VerseVIEW has been a vital tool for churches to present verses and song lyrics over Video meeting platform like Zoom or on live stream platform like Youtube. Timely updates have been made to support various setups at churches. VerseVIEW Mobile applications are actively used by 100s of thousands of users each week.

In other powerful features aiding Bible study, VerseVIEW Mobile Bible application provides a parallel Bible to view up to three translations at a time. Furthermore, the application has features to find related verses (cross-references) and search the Bible text and make notes. This is an ideal tool for Bible study and for preparing messages.

VerseVIEW has another app dedicated to songs and lyrics display. The Songbook application provides the lyrics to 1000s of Malayalam, Hindi, Tamil, Telugu songs. This application also provides chords for over 500 common Malayalam songs. These chords have been generously provided by many talented musicians. The chords can be transposed and also displays chords as keyboard and guitar tabs. Many aspiring musicians have benefited from this to play music with the church choir and at home together. It is also proved to be a chord learning tool for Christian songs. with Children and early music learners

VerseVIEW Team members have contributed countless hours to create and maintain the song database with accurate lyrics and transliteration, Bible databases, chords and the many software applications for Windows Mac, iOS, Android and web. VerseView is a boon to the Christian community and promises to integrate lots more improvements and addition in near future, with Powerful presentation features for organizations and aided Bible study for individuals.

Glowing while igniting, KE Igniter nominates the Editorial team for 2022- 2023

Verse by Verse Bible study on Gospel of John

Bangalore Center One PYPA has arranged a Special Meeting…

ORAL BIBLE TRANSLATION A BOON TO OVER 900 UNREACHED PEOPLE…